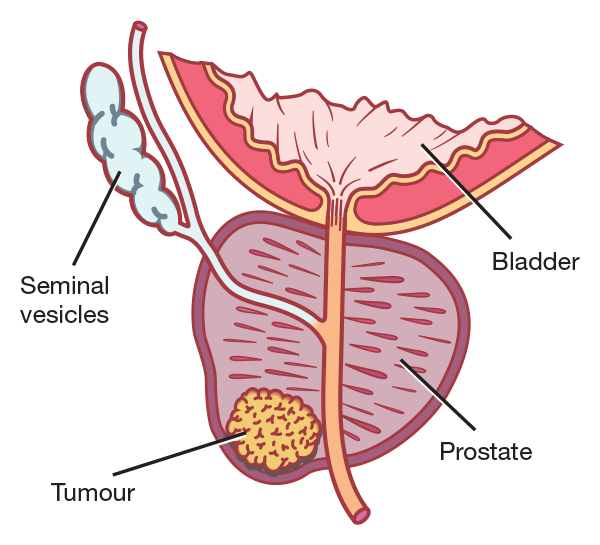 The prostate gland is a walnut-shaped organ with two lobes which lies just below the bladder, surrounding the urethra. The size of the prostate varies with age. In younger men, it is about the size of an almond fruit, but it can be as large as a tangerine or even a big orange fruit in older men. It produces seminal fluid, which nourishes sperm cells and it helps to direct semen outwards during ejaculation. Prostate Cancer is cancer that occurs in the prostate gland. Cancer begins when cells in a part of the body start to grow out of control. Cancer cells can move from one part of the body to another part, and continue to grow in the new location even at the expense of normal cells in that organ.

At the moment prostate cancer is the most-commonly diagnosed cancer in men and the second most common cause of cancer death in males worldwide. It is the number one cancer killer of Nigerian men with a mortality rate of over 80%. A recent report by the World Health Organization (WHO) shows that within a period of 4 years, deaths from prostate cancer in Nigeria increased by almost 100 per cent. The report showed that Prostate cancer now kills 26 Nigerian men every day (up from 14 men every day).

Like many other malignancies, the specific cause of prostate cancer is not known. There are, however, risk factors that may predispose one to having the disease. Such risk factors can be classified as modifiable or non modifiable.

Non- modifiable risk factors are those which the individual has no control over. These include Race, Age and genetic/familial predisposition.

Family history: Having a father or brother with prostate cancer more than doubles one’s risk. Men with several affected relatives have a much higher risk, particularly if their relatives were young at the time the cancer was found.

Race: Prostate cancer occurs more often in Africans. It also occurs at an earlier age in blacks and has a more aggressive course.

Diet: Men who eat a lot of red meat or high-fat dairy products appear to have a slightly higher chance of getting prostate cancer.

Obesity: Men who are obese (very overweight) have a higher risk of getting more aggressive prostate cancer.

Smoking: smoking has been linked to a possible increase in the risk having prostate cancer.

Workplace: People who handle chemicals are generally at more risk for cancer than the general population.

A man could have prostate cancer without having any symptoms at all. This is what is seen in many cases. It may present with features of lower urinary tract obstruction such as straining to urinate, waiting for a while before urine starts coming out, poor urine stream, bloody urine,sudden stopping and starting of the urine stream even when the bladder is not empty, urinary frequency, feeling of incomplete bladder emptying, incontinence, terminal dribbling, urinary retention and kidney failure. The above symptoms are also similar to symptoms of benign prostatic hypertrophy (BPH), which is non-cancerous. Patients may also present with waist pain, shortness of blood and breathlessness. There could be weight loss, poor appetite, weakness or numbness in the lower limbs. These other symptoms are more commonly found in those with prostate cancer.

Physical examination alone cannot reliably differentiate benign prostatic disease from cancer. Blood levels of Prostate Specific Antigen (PSA) and Ultrasound Scan of the Prostate along with Digital Rectal Examination (DRE) of the prostate can help in differentiating. Consequently, a biopsy is warranted to establish a diagnosis. If cancer is suspected, determining whether the disease is localized or extends outside the prostate is important for planning treatment.

Currently, the majority of prostate cancers are identified in patients who are asymptomatic. Diagnosis in such cases is based on abnormalities in a screening PSA level or findings on DRE. In addition, prostate cancer can be an incidental pathologic finding when tissue is removed during transurethral resection of the prostate (TURP) as a means to manage obstructive symptoms from BPH. Kelina Hospital has equipment for Bipolar TURP as well as Transurethral Vaporization of the Prostate, as well as Laser Vaporization.

Factors considered in the treatment of prostate cancer include the age of the patient, the extent of the disease as well as the degree of aggressiveness of the cancer.

For locally advanced prostate cancer, radiation therapy along with androgen ablation is generally recommended.
Metastatic prostate cancer is rarely curable. Management of these cases typically involves therapy directed at the relief of particular symptoms (e.g.palliation of pain) and attempts to slow further progression of disease with androgen blockade and anti-cancer chemotherapy.

Hormone therapy for prostate cancer is also known as Androgen Deprivation therapy (ADT). It may consist of surgical castration (orchidectomy) or medical castration, using medications like antiandrogens and luteinizing hormone-releasing hormone analogues. Testosterone, a hormone produced by the testis, stimulates growth of prostate cancer. By removing the testis or using medicines that either bind to testosterone receptors to block the effect of testosterone or medications that block the production of this hormone, prostate cancer cells cannot thrive.
If detected early, prostate cancer is curable. Locally advanced or metastatic disease is more recalcitrant.