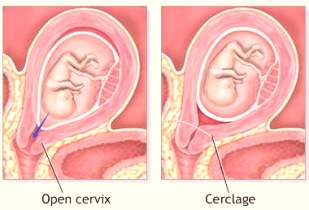 Cervical incompetence (also known as cervical insufficiency) occurs when weak cervical tissue causes or contributes to premature birth or loss of an otherwise healthy pregnancy. It is the inability of the cervix to carry pregnancy to term.

An incompetent cervix can be diagnosed prior or during pregnancy. In pregnancy, the competence of a cervix to carry pregnancy to term is assessed through a stepwise approach which includes maternal history of painless mid-trimester pregnancy loss which is characteristically associated with a decrease in gestational age attained at subsequent pregnancies, mid trimester spontaneous rupture of fetal membranes, history of pelvic procedures like forceful dilatation of cervix during gynaecological procedures, extensive cervical lacerations and so on. The diagnosis is cinched during a pelvic exam which would reveal a short cervix which might have started dilating in early second trimester. Also serial transvaginal ultrasoundscan would reveal a wider endo-cervical canal diameter and short endo-cervical length. These tests are usually carried out during the second trimester of a pregnancy. Your doctor might recommend testing if you have a history of premature deliveries or if your cervix begins to open up early.

A patient with an incompetent cervix may not have any symptoms in the early stages of her pregnancy. Frequent antenatal visits can help your doctor monitor your health and your baby’s health. Mention any symptoms that concern you even if they seem silly or unimportant. Some things to look out for include:

The cerclage stitch is usually left in and removed at the 37th week. It can also be removed when the woman’s water breaks or contraction starts. The stitch can be removed in the doctor’s office in a procedure similar to having a pap smear.